Book online now or call to discuss your visit.

An announcement which was published in the Caledonian Mercury (a Precursor to the Scotsman Newspaper) has recently come to light. The announcement, which appeared in April 1787, called an AGM for the Earlsferry Golf Society who played over the Links at Earlsferry. As play at that time was over part of the current course, this has confirmed it as the third oldest golf course in the world, only behind St Andrews Old Course (1754) and Musselburgh Old Course (1774)

A full list of the oldest courses in the world is available from the link below:

Additionally, there is evidence to suggest that golf was played in Elie dating back to the 1500’s. It particular, note of an official right to golf was supposedly included in a Burgh Charter in 1589. This document was unfortunately destroyed in a town hall fire so its existence or date can’t be confirmed. Reports of the first golf being played at St Andrews date back to 1552 so it’s plausible to imagine golf being played at Elie close to its inception date.

With the new golf season on the horizon we are delighted to announce that Michael Bradfield formerly Assistant Professional at Elie has returned to take up the post of Head Professional of The Golf House Club.

Michael left us in early 2019 to work at The Dutch golf club in The Netherlands. With our previous Head Professional Gavin Cook recently taking up post as Secretary of The Golf House Club, the opportunity arose for Michael to return to familiar surroundings and further his career at Elie. 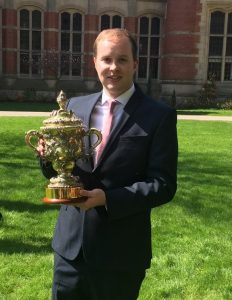 Michael excelled during his training, both practically as well as academically. This culminated in him receiving the Whitcome Cox Trophy for being the number one PGA Trainee Professional in Great Britain & Ireland at his graduation in 2019 along with the Golf Pride Custom Fitting Award for the number one custom fitting student in his year. Michael has continued in his development over the past season by gaining his Club Managers Association of Europe Diploma in Club Management as well as becoming a Level 2 Certified TrackMan Coach

Further recognition of Elie’s ranking as a high quality golf destination came with the recent publication of the 2020 Top 100 Courses in Scotland.

Up 8 places, Elie are now #35 in a prestigious list that includes many world class golf courses.

We now have the facility on the Golf House Club website to post course update information via a Twitter feed. This is in real time and will be updated by a member of staff whenever there is a change in playing conditions, such as course maintenance or a course closure from frost or snow. Typically there is about a five minute lag from update to the information appearing on the website. If you wish you can also receive updates by following Twitter account @golf_elie.

The information is posted on the Home page just below the course video.

2019-2020 Winter Rates
Please note that our low season green fees will start on Monday 21st October 2019 and continue up to and including Sunday 22nd March 2020.
The weekday rate is £47 per player and £49 at weekends, both prices include either a coffee and bacon roll OR soup and a sandwich.
Visitors are requested to visit our web site www.golfhouseclub.co.uk for more information about the Club and golf course. We would ask that all in your group are familiar with the dress code that is applied both on the course and in the clubhouse. We also draw your attention to our restrictions on the use of mobile phones.
The links at Elie always present a good challenge year-round and winter playing conditions are excellent.